Since the day that I packed up and moved out I still find the occasion treasure or surprise; a few weeks ago I came across these two rolls of film. Immediately I wanted to get them developed I seriously stopped everything that I was doing, threw on some clothes and headed to Sam’s Club to get them developed at the one hour photo. To my horror, Sam’s Club (as well as Target, Wal-Mart, CVS, etc) no longer develops film!!! When I asked the girl behind the counter at the photo center where I could go, she said  “I didn’t know anyone still used film, that’s so old school.” I was partially annoyed with her response but mostly didn’t give a shit if she thought it was “old school” what is wrong with using film?  What is wrong with film? Seriously. I do not understand why is it becoming obsolete. Because digital is better? but it is really? Is it really better that digital takes away all the raw elements that film gives us? Personally digital is not my thing, sure it is convenient for instant pictures and sharing but there is something about being able to have the negatives in your hand, raw and unaltered. I have this theory (don’t jump all over me) that people who have never developed their own roll of film cannot appreciate it as much as someone who has. There is a certain amount of love and dedication that goes into developing your first roll of film, that same passion translates into the images that are printed, ESPECIALLY when you can print them yourself. There is no place that I would rather be than in a darkroom. I haven’t been in a darkroom in ages and I miss it, the musty smell that hangs in the air, the cold darkness, something about it makes me really happy inside.

I am getting off topic… I love film. I love developing it. I love negatives. I love tangible evidence of my memories.

So after having my mind literally blown that no one develops film anymore I decided to get on trusty google (where would we be without google? That’s a topic for another day, surely) When I would drive down to Long Beach a couple times a week on 2nd street I always passed this shop: Fromex Photo & Digital. I initially was excited upon seeing it and thinking that of course downtown Belmont Shore would house this awesomeness but never ventured further into it until a few weeks ago. So after my google search I found out that Fromex offer film developing services, you mail in your film (with their FREE shipping label) and the corresponding paperwork and they get it develop it, print it, scan it to a CD, or what have you, charge your card, and mail it back.

So these little babies will make the journey to Long Beach tomorrow and hopefully be back to me in a week’s time or so. I cannot wait to see the memories that have been locked away in these tiny canisters. I am beyond overjoyed that Fromex exists and that they are not letting film and film developing die.   I will make sure to share the images when they come back. My guess is that the images on those rolls are easily 6 years old. Hopefully time hasn’t stolen my memories. 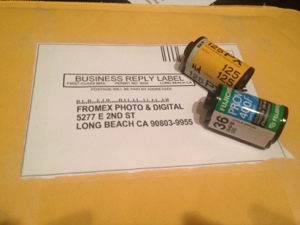 p.s. please check out all of the awesome things that Fromex has to offer 🙂 www.Fromex.com