So this year I made it a point to really get myself into shape and to start caring more about what I put in my body and the amount of activity that I participate in. Currently I work out with a group of woman in Corona at a bootcamp style class; we meet 5 days a week for one hour and our instructor pushes up. We run, we do a little strength training with dumbbells, a whole lot of jumping jacks, squats and my least favorite lunges. I have been doing this for about 3ish months now and I love it. This year is the year that I rediscover my love for exercising, and I think the love is already in full swing.

So since my love for being active is back I decided to look into a wearable device that tracks my calories, steps, sleep, water intake, etc. I wanted to make sure that on the days that I wasn’t in bootcamp that I was still being physically active and not slacking off. (I read an article recently that stated that being sedentary can lead to decline in brain activity.. and really who wants that?) Back to the wearable.. I swear I read a million different blogs comparing the Fitbit Force, Fitbit Flex, Nike Fuelband, Nike Fuelband se, Jawbone UP, Jawbone UP 24, and some other random devices that I had never really heard of. I read until I seriously couldn’t read anymore.. because really when it comes down to it they all did the same thing and ended up being a preference of brands; as my mom put it “Apple vs Android”

I initially picked up the Fitbit Force after a bunch of reading thinking that it would be the most comprehensive and Ronni friendly (not too techy, simple to use, seamless transition from iPhone app to web based information input)…. super long story short, it was not at all Ronni friendly.  First thing, it was a huge clunky piece of plastic on my wrist, it looked very manly (I wish I had taken pictures). Second, I had also recently read about Fitbit Force owners getting rashes from the device, with my luck I would end up with a rash since I have crazy sensitive skin. I was also turned off even more by the Fitbit Force when  I continued to research the rash problem to find that Fitbit was denying that their product did this to people and they were even deleting comments from concerned users on their Facebook and message boards (you can find the rash article here). Another thing that I hated about it was that I could not for the life of me get the time to be correct, I synced it, reset it, I charged it, I did everything that I read to do but the time would never read the correct time. At this point I was WAY over the Fitbit Force. So I drove over to Target and got rid of it and picked up the Jawbone UP instead.

From the beginning of my wearable search the Jawbone UP was the one I had my eye set on, for reasons that I cannot even explain I went against my own gut feeling (I was more than likely swayed by bloggers..pffft) and started off with that Fitbit Force nonsense.

From the moment I put the Jawbone UP on in the parking lot it was love. The  band was significantly less bulky than the Fitbit Force, Jawbone also offers a wide variety of colors, I chose the grey because I felt that it went with more outfits than the more flashy colors that they have; blue, mint green, red, black. I also loved that I would be able to wear my watches and that the Jawbone would not draw too much attention to itself. My wrist was so happy and I hadn’t even set it up yet. 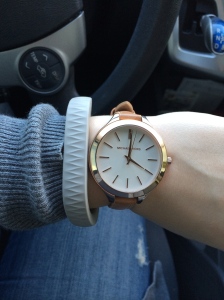 So I charged the little baby up, it comes with a little USB charging device that is super easy to use. After it was all charged I set it up, it took me all of 5 minutes, if that.. super easy.. Ronni friendly. With the Jawbone there is no display to worry about and no clock to annoy me because the time is wrong. I set it up with the accompanying iPhone app and bam I was ready to try it out. The day I got it not much got tried out because it was later in the day, so the real test came when I had bootcamp the next morning.

At bootcamp the Jawbone did not interfere with my heart rate monitor; thumbs up for that. It didn’t get in the way of my workout and it didn’t fall off or slide down my wrist like I was a little scared that it would. As soon as my workout was over I got home and plugged my Jawbone into my phone to sync and I got instant feedback of how many steps I had taken during my workout and the caloric value of the workout that I timed. I am visually motivated so instant feedback is great in my book.

This is the first week that I am using the Jawbone UP and it already has me obsessed with trying to outdo the amount of steps I took the day prior and make sure I get more sleep than I was getting in the past. Overall I am really happy with my decision to swap the Fitbit Force for the Jawbone UP, and if Target had had the Jawbone UP 24 I probably would have gone that route instead. The 24 is bluetooth and to sync you just press a little button that shoots the info on over to the app, but really I have no problem taking the band off and plugging it into my phone in order to sync the information.. I mean how lazy is that button realllllly?

A couple of other things that I love about my Jawbone; silent alarms, the band vibrates to wake you up or for custom times.. I have mine set for every 2-3 hours so that I remember to eat and the app syncing with a handful of other apps that I use, UP syncs with My Fitness Pal to log your food into the UP app and keep all of your information in one place rather than having to use a bunch of different apps to stay on the same page.

Like I said I have only been using my band for only about a week, I am excited to see what kind of stats I have by the end of 2 weeks and again after a month. I can see this band being a very useful tool in helping to keep me on track and I am glad that I made this investment. I will update in time about my progress and how my Jawbone is performing.